DBeaver is an open source, multiplatform and totally free graphical software implemented in Java/Eclipse and designed from the ground up to act as a SQL client and universal database manager for GNU/Linux operating systems. The project’s main goal is usability.

In addition, DBeaver can handle external data sources whether they have a JDBC driver or not, various database management tools, such as ERD, and a collection of plugins for the MySQL and Oracle database servers.

The application is based on an open source framework and features a powerful plugin architecture, allowing the user to easily extend its default functionality by creating extensions/plugins.

The software comes with separate functionality for the MySQL and Oracle database servers, among which we can mention support for Enum/Set datatypes, an advanced metadata editor, catalogs, users and session management, metadata DDL, triggers and procedures views, support for XML and Cursor data types, as well as support for browsing and editing various metadata objects, including tablespaces, indexes and packages.

Under the hood and supported operating systems

The software is written entirely in the Java programming language, DBeaver is a platform-independent application that supports Linux, Solaris, HPUX, AIX, Mac OS X and Microsoft Windows (2000/XP/2003/Vista/7) operating systems. It has been successfully tested with both 32-bit and 64-bit instruction set architectures.

add to watchlist send us an update
7 screenshots: 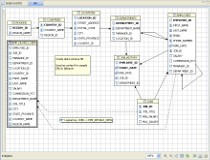