This is the 64-bit listing of the Adobe Flash Player software, a freeware and proprietary web browser plugin that provides users with support for watching rich multimedia content and view or execute rich Internet applications created with the Flash technology.

Created by the Macromedia web development software company 18 years ago, Adobe Flash Player was previously known as Macromedia Flash. Besides Linux, it supports the Microsoft Windows and Mac OS X operating systems, for which they provide newer versions of the plugin.

Getting started with Adobe Flash Player

In order to install the Adobe Flash Player plugin in your Linux OS, you should first close any active web browser instance and uninstall previous versions of the plugin from the system. Next, you'll need to download the binary archive and extract its contents in the hidden ~/.mozilla/plugins folder under your Home directory.

If you want to make the plugin available system wide, you should extract the contents of the binary archive in the /usr/lib/mozilla/plugins/ folder, as root (system administrator), or install it from the official software repositories of your Linux distribution. Furthermore, you can use the provided RPM file or YUM repository for any RPM-based Linux distribution.

Chances are that Adobe Flash Player will soon be deprecated in favor of the modern HTML5 web technology, which is already used on well known multimedia hosting and streaming websites, such as YouTube. 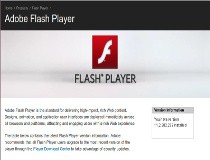