Squid is an open source, full-featured and high-performance web proxy cache application that can be arranged hierarchically for an improvement in response time and a reduction in bandwidth usage.

It works by first caching frequently used websites and then reuse them to provide users with a much faster web browsing experience, as well as to reduce the costs of their expensive Internet plans.

Supports a wide range of protocols

Used by many ISPs around the world

The program is mostly used by ISPs (Internet Service Providers) who want to deliver their users with ultra fast and high quality Internet connections, especially for intense web browsing sessions. It is also used by several websites to deliver rich multimedia content faster.

Being the result of many contributions by unpaid and paid volunteers, the Squid project has been successfully tested with popular GNU/Linux distributions, as well as with the Microsoft Windows operating systems.

Squid is an important project for all home Internet users, but it was extremely useful a few years ago when there weren’t so many high-speed Internet Service Providers (ISPs) out there.

These days, thanks to the ever-growing network technologies, one those not need to install and configure a Squid proxy cache server in order to have a faster web browsing experience. However, this doesn’t mean that it’s not useful in some third world countries where high-speed Internet connection is still available only to rich people or big companies. 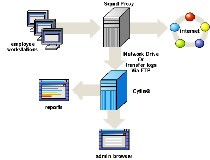