A hackable, highly customizable text editor for the 21s century, created by GitHub

Atom is a free, cross-platform, and open-source graphical software that has been designed from the ground up to act as a hackable text editor and programmer's editor application that helps any aspiring developer to write code without too much hassle.

Prominent features of Atom include cross-platform editing, which means that you can use it on your favorite operating system, no matter if it's a GNU/Linux, Mac OS X, or Microsoft Windows, and a built-in package manager that allows developers to search and install packages from within the app, or even create new ones.

Another interesting feature of Atom is called "smart autocompletion" and it will help you write code faster than ever before. The application also comes with a built-in file system browser so you can easily locate your projects and start coding immediately, as well as multiple panes for comparing and editing code across several files.

The find and replace functionality could not be overlooked, as Atom lets users find, replace, or preview text in the application as they type in a single file or across multiple one from a big project. You can even find and replace text from files across all of your projects.

Being a highly customizable application means that you will be able to change its looks by installing new theme, which are available from the project's website free of charge. Additionally, it is possible to tweak the user interface to your likings with CSS/Less, as well as to add new functionality with JavaScript and HTML5.

Lastly, Atom can be easily extended through plugins, which are called packages in the application. Over 2,000 package are available on the official website of the project, free of charge as well. They will allow you to add new functionality to the app, as well as to replace existing features with better, smarter, and flexible ones. 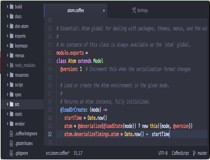